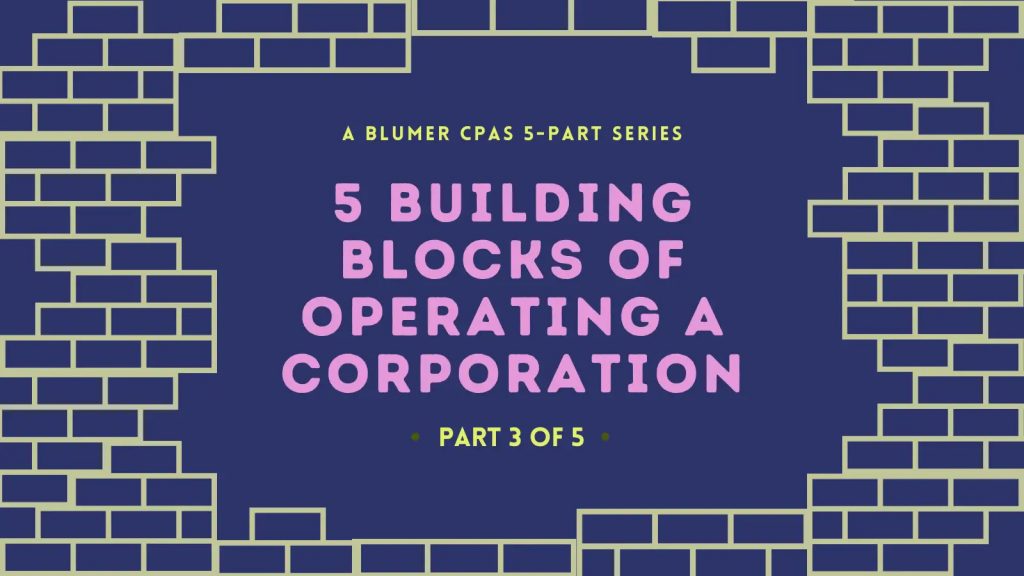 Hey, hey. Jason Blumer here with Blumer CPAs, and we’re in a series of the 5 Building Blocks of Operating a Corporation. We’re using a deck our team uses to teach our clients the value of structuring their business around a corporation. And so, we’ve been talking about things already up to this point. But those five building blocks are something I want to hit now, and these are five things we really want to talk about with our clients as they’re growing and they need more structure. Typically as they’re electing an S-corp status as they’re moving out of what a solopreneur, a sole proprietorship for tax purposes, or they’re just what’s called a single-member LLC, and they’re ready to move into an S-corporation. We don’t want them to do that blindly. We want our clients to understand some things, and I’m not going to really reveal a lot of things in these blocks just yet. But I do want to talk about these five main building blocks of a corporation.

Now there’s a lot to a corporation, so somebody else watching this would go, “Hey, there’s a lot more than that.” That’s true. But what we do is teach our clients from the outset, what it means to step into a structured company, a legal entity, and how you feel hemmed in and bound by that when really that’s what brings a lot of safety to your growth. So I’m just going to hit these titles in the 5 Building Blocks of a Corporation.

The first one is the corporation. An attorney can create a corporation in the state that you’re actually domiciled in, is what they say. Or we can actually take your LLC, something that you’ve already created in the state that you live, and we can elect that as an escort with the IRS. And we do that work. Distributions and payroll, two and three, go together. So now that you step into a corporate structure from an LLC or a sole proprietorship, you got to start paying yourself in two different ways through what’s called distributions and payroll. Actually, the IRS requires that you take what’s called a reasonable wage. That’s a payroll, and that’s money a payroll system pays you and has payroll taxes come out, even if you’re the only owner and you’re the only employee. It’s required if you’re an S-corporation. The IRS requires that of you.

And so what we start doing is we use the ability to manage taxes in a way so that you can get the distributions and payroll to pull money out of your company in the most tax-advantaged way. That’s what an S-corporation lets you do.

And then taxes are part of the deal. So now you’re going to be paying payroll taxes, remitting those. So we use payroll systems to do that. But you also are going to still have payroll in your company, or profit in your company rather, and you’re going to pay taxes on that. So estimated taxes are still part of what you have to pay, even when you elect an S-corp status and estimated taxes should have been something you were paying when you were a sole proprietor as well.

And then what we do is we step you into a structure. That is something we help create. It is a more defined legal entity with payroll systems. And we get into a relationship with our clients, where we manage the structure of that, that starts producing a lot of tax advantage profit in your company. And if you’re hitting certain profits, 80, 100 grand, whatever you are per year as a sole proprietor LLC, you may want to talk about, thinking about stepping into a structure that can pull a lot of tax-advantaged taxes out of that. So that’s a little bit more about what we do. Thank you so much for watching the blog. We’re going to keep talking about this 5 Building Blocks of a Corporation. We’ll see you. Take care.