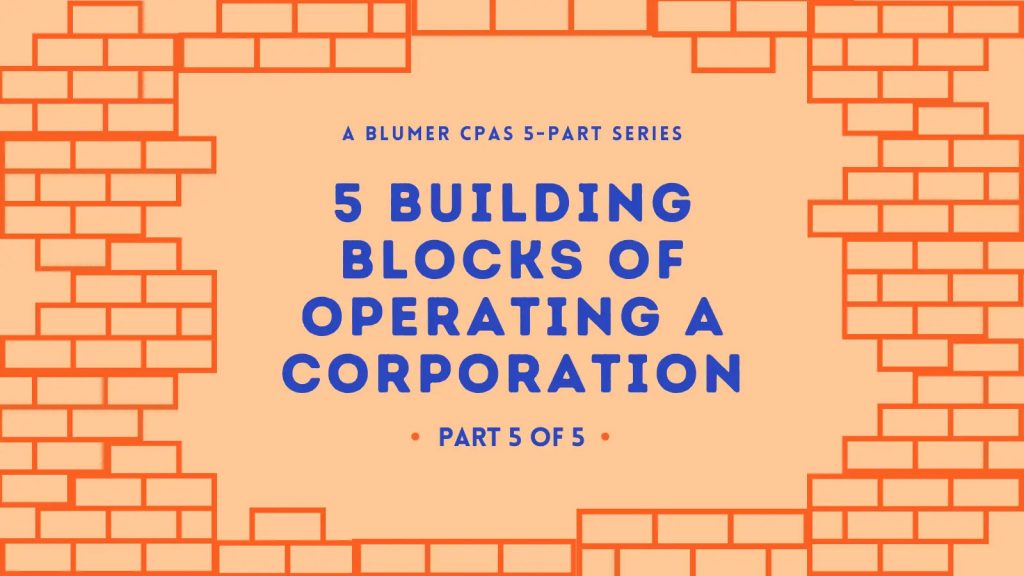 Hey, Hey Jason, Blumer here. We’re in our fifth video series on five Building Blocks of Operating a Corporation. This is just the stuff we do in our sleep for the creative agencies we work with. And this is going to be the last video in the series, but it’s really long so. Because I’m going to give you an example. The examples are the best way we use this deck to teach our clients actually how they’re going to save money. So just bear with me as we try to get through this long presentation. This is really going to help bring a lot of understanding I think. So what you’re looking at here is just a P&L. That’s what we call a profit and loss statement on the left. Revenue, expenses, payroll, profit distributions, and then just a total line at the bottom.

And you got two examples up here. You got what you used to be, LLC sole proprietor example. And you got what we’re moving you into an S-corp example. And this really will help you see exactly where does this tax savings come from? But to just show it to you, let’s just put up some things up here at the front, the LLC. Let’s say you made a $100,000 just expenses of 25 grand. You had taxable profit of 75. You took 50 out, right. Since you’re just a freelancer, just starting, you got 25 cash left. Let’s run that same example as an S corporation. Now, but as an S-corp, remember you have to take a wage. So you see there’s a line payroll to owner 25 grand, right? So that’s a new… What we’ve done is we’ve taken 50, half of the 50 of the draws you originally took, and we moved it to the $25,000 line in payroll.

And then the other 25,000 you just continued to take in distribution. So this is really the same net example 100 in revenue, 25 minus general expenses. Now there’s a new expense on this profit and loss statement for this S-corporation that’s now an agency. This agency that is now an S-corporation rather. They’ve taken 25 grand out in payroll with 50 leftover for taxable profit. They’re taking draws at 25 and then 25 cash left over. Okay. So there’s the examples and how they’re different. Now let’s look at the tax effects. And remember from some of the videos you’ve seen before, there’s two taxes you’re paying as an owner and that’s a regular tax, that’s the tax every single person pays in the whole world. Then there’s a self-employment tax. Now the regular tax or what we call ordinary tax, that’s on a graduated rate, right? That’s the brackets people go through when they filed their taxes.

We’re making an assumption here that that tax is 15%. So this is a lower income person. So their pay is a little bit lower, but it’s just an example of 15%. It would work at higher rates too. We just wanted to show a similar example. So let’s look at the taxes that take place. Okay. So on the sole proprietor side, the taxable profit is going to be taxed at a regular tax, $11,250 at that 15%. It’s also going to be taxed at the self-employment rate of $11,475. So the total profit is being taxed $22,725. So that’s the total. Let’s see how that applies to the S-corp side. Now on this S-corp side, there’s various levels being taxed. So the payroll now is being taxed at the regular tax, right? Because you’re going to get a W2 and you’re going to put that on your 1040. You’re going to pay tax on that money you pulled out as payroll.

So let’s kind of show the difference. So on this payroll line, the tax went up by $7,500, right? But if you net the $22,725 [inaudible 00:04:39] the $7,500 on the escort, you’ll see the tax went down for what’s taxed on the profit side of 15. And that total savings is $7,600 in this example. That’s real savings. That’s tax you’re not going to have to pay. And you might say, all right, where did this come from? Well, it’s these two areas here that we’ve highlighted in green. These two… So what we’ve done is the IRS used to say, as a sole proprietor, all of your profit is tax for self-employment tax. But on the S-corp side, now the only thing that’s taxed for self-employment purposes is what you choose to pay yourself in a reasonable wage.

You now have control over what you’re saying you get to be taxed as self-employment tax. Now it does have to be a reasonable wage, but you still get to tax it in the way that you want. And that’s the money you’re going to save. The difference between that $11,475 and the $3,825 is that $7,650 that we save. So that’s an example. You’re going to have to slow this video down to kind of walk it through. But this is roughly what we walk our clients through. And we’ll put their numbers in these examples and help them see exactly what’s going to work for them. So I hope that helps. If you do need help, we can help you do this too. Just email us at [email protected] Thanks for watching. We’ll see you.